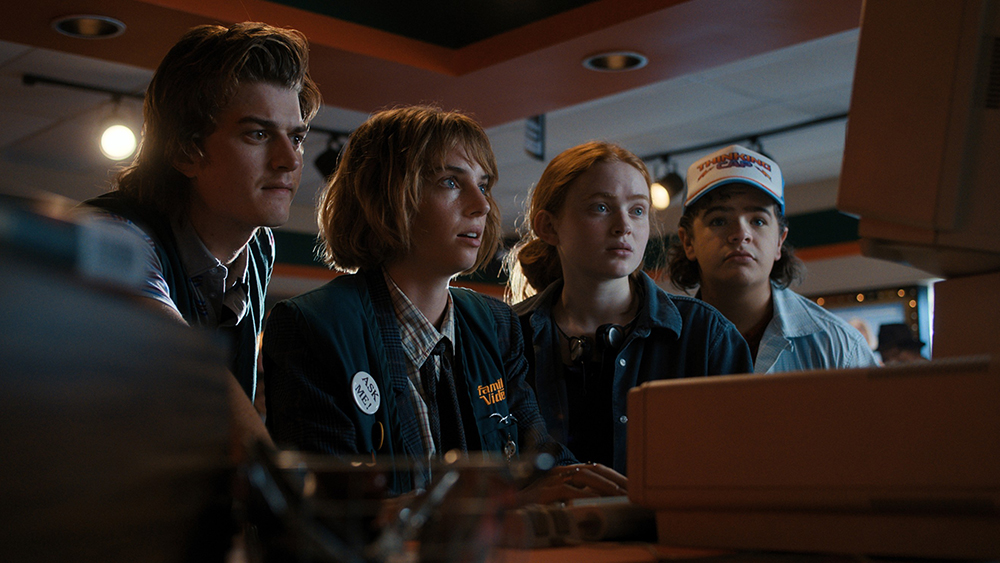 The young adults of “Stranger Things” are dealing with a lot over the course of Season 4. There’s the looming terrors of graduation for Nancy (Natalia Dyer) and Jonathan (Charlie Heaton), the crushing work of managing a video store for Steve (Joe Keery) and Robin (Maya Hawke) and the threat of a paranormal serial killer Vecna murdering the townspeople of Hawkins. But perhaps no issue weighs on the four more pressingly than their love lives, which are in total disarray at the season’s start.

For Nancy and Jonathan, the main issue in their relationship is distance. After three seasons as one of the main “Stranger Things” duos, the two are separated by thousands of miles, with Jonathan living in California with his family while Nancy stays in Hawkins. According to Heaton, over the course of the season, Jonathan struggles with the distance between them in a way that’s very realistic for any couple to go through.

“I think what the [Duffer] Brothers did, their writing is always clever, they ground it in reality. You’ve got these two teenagers who made a promise that they were going to stay together no matter what. And the reality of that is always going to be much more difficult. I think he was hoping she would come up to see him when she doesn’t, so like any any form of rejection, it kind of makes him doubt himself and doubt this relationship that means a lot to him,” Heaton told Variety. “It’s hard, distance, distance is a difficult thing in any relationship. It’s going to cause all sorts of crazy problems in the body and mind. So that was fun to play that.”

Back in Hawkins, Nancy reconnects with her ex Steve while working to defeat Vecna, with the show hinting at possible romantic feelings between the two resurfacing. Although Dyer enjoyed seeing the two grow closer again, she said that whatever happens in Nancy’s love life, she hopes that the writing stays true to the character.

“I think it’s really nice for Nancy and Steve to come back to each other after a few years of kind of growing from where they were. They’re two characters that really care about each other, so it’s really nice to see that again,” Dyer said. “I want something for Nancy that makes sense. I don’t want her to just end up with somebody because it feels like that’s what she needs to do. I think she’s probably got a lot of other things going on.”

Steve’s arc throughout the season finds him effortlessly picking up girls, but failing to find anyone he has a real connection with. According to Keery, Steve’s struggles with his love life mirrors his overall struggles with finding a direction in his life.

“If I was Steve’s Dad, I’d be like, ‘You’re moving into the city,’” Keery said. “Now that he has some real support from Robin in his life, I feel like it’d be fun to see him outside the world of Hawkins. He feels so meant to be there for the rest of his life. Also, I’m not sure if Steve is really like a long-term thinker, he’s kind of a short-term thinker. So I think, getting to the next day, in a lot of ways, is the furthest he’s thinking ahead.”

One character whose romantic prospects are in a much more hopeful place is Robin. After coming out to Steve last season, the first few episodes of Season 4 see her smitten with an acquaintance Vickie (Amybeth McNulty). For Hawke, the experience of exploring Robin’s love life was a refreshing change for how gay characters are often treated in genre shows, where there relationships aren’t given focus or priority.

“A lot of the time, gay characters these days often get to be gay without acting on it, they don’t get to kiss someone or have that really be a core center of their story,” Hawke said. “Not that there’s any kissing in the season there. There may or may not be kissing. But there are like real feelings and a real story that gets built and that feels like a really awesome step for Robin’s journey.

“And a really cool step for queer characters in sci-fi that I’m really happy about.”