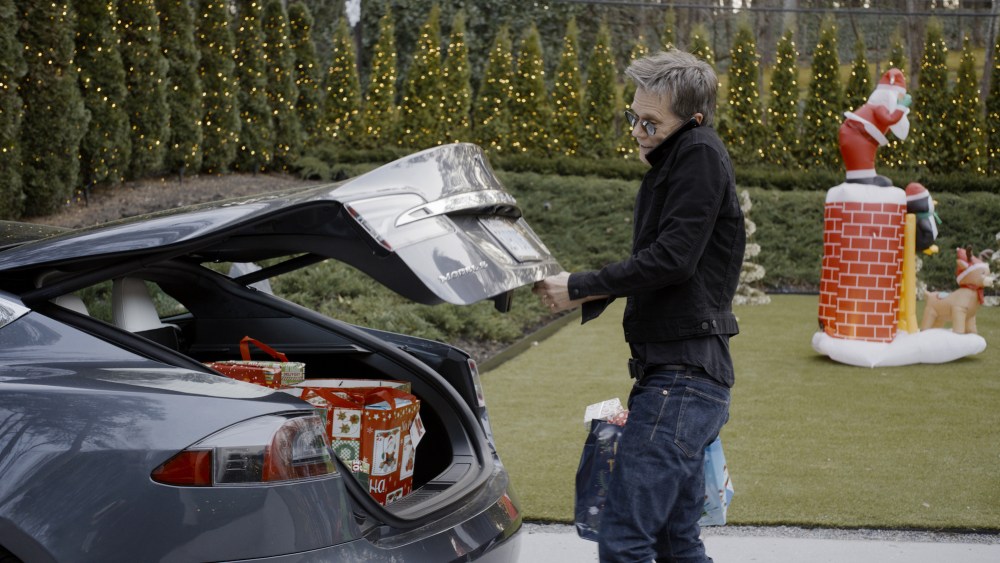 When James Gunn was 20 years old, he ran into Kevin Bacon at a New York City screening. The aspiring filmmaker was floored and approached the movie star with an important message.

“I went up to him and said, ‘Mr. Kevin Bacon, you’re my favorite actor, along with Mr. Peter Falk,’” Gunn remembers.

Sadly, Falk passed on to the big multiplex in the sky before he got a chance to work with Gunn, but flash forward a few decades and Bacon is front and center in “The Guardians of the Galaxy Holiday Special.” And the actor, who previously appeared in Gunn’s 2010 film “Super,” is playing himself — well, a Christmas-loving version of Kevin Bacon who gets kidnapped by Mantis (Pom Klementieff) and Drax (Dave Bautista) as a gift for super-fan, Peter Quill (Chris Pratt). It’s a hilarious twist in a very off-beat ode to the kind of ’tis-the-season cinematic celebrations that Gunn grew up with. It also proved to be the perfect escape from production on “Guardians of the Galaxy Vol. 3.” Gunn says that upcoming sequel has much higher stakes than the previous entries in the franchise, so it was helpful to cleanse the palate by working on something that was much goofier.

“The Guardians of the Galaxy Holiday Special” debuts on Disney+ on Nov. 25. Gunn, who was recently tapped to lead DC Studios, spoke to Variety about making the special, casting Bacon and what to expect from his upcoming farewell to the “Guardians” series.

You tweeted that you’ve bugged Marvel Studios’ Kevin Feige about doing this story for years — did you mean making a holiday special, or having the Guardians kidnap Kevin Bacon?

The holiday special is something that I had been wanting to do before “Vol. 2” was even released. I brought it up to Marvel while we were in post-production on that film. That’s when Kevin [Feige] was like, “Oh, we should actually do that.” I’m a big Christmas guy. I love all the Christmas specials that I saw as a kid and wanted to do something like that. But I also wanted to bring the anarchy of the Guardians to that.

What’s the key ingredient to making a good holiday special?

Every holiday special has to have its own spin on it, but also needs to have an un-ironic love for Christmas. The specials I like the best, whether it’s “The Grinch” or “Rudolph the Red-Nosed Reindeer” or “Elf,” all these things have this unabashed love of Christmas along with an appreciation for the insanity that surrounds it.

If Kevin Bacon had turned you down, what would you have done?

I would have recast with a different actor, but I’m glad I got my first choice.

How much is the Kevin Bacon we see in “The Guardians of the Galaxy Holiday Special” like the real Kevin Bacon?

Kevin doesn’t like Christmas. That part was hilarious to me. I have Kevin showing up on set in what is supposed to be his house, and it’s filled with all these enormous inflatables. It looks like Santa Claus vomited all over the Bacon house, which looks nothing like Kevin Bacon’s house in any way. It’s so L.A.-looking, which is just not Kevin. But Kevin is this super nice guy. He’s so talented, so professional, so egoless and just a really kind person. That part of the character is just like him.

A really nerdy question: Did you and Kevin Feige talk about how doing this movie would preclude Kevin Bacon from playing a character in the MCU? Or did you talk about the fact that he played a villain in “X-Men: First Class,” and that movie is ostensibly part of the Marvel multiverse?

No, we didn’t. One of the things that Kevin Feige has really impressed upon me in running the MCU is that what matters most is the project right in front of him. You may have a plan about how you want to do something down the road, but if it screws up the thing right in front of you, then it doesn’t work. The best thing for the holiday special is Kevin Bacon, and if that means that Kevin Bacon is a different character later on in the MCU, it doesn’t really matter. It’s not real. None of this is real. He was the perfect person to cast as Kevin Bacon. If we had cast John Schneider as Kevin Bacon, it wouldn’t have worked as well.

The movie ends with a hint that there will be more specials. Are you thinking of making more?

It’s unlikely that I would return to it at this point, at least in the near future. But who knows?

A lot of this film plays like a buddy comedy featuring Klementieff’s Mantis and Bautista’s Drax. Was that something you set out to create?

I think of Drax and Mantis as the group Costello and Costello. They are the unintended firehose of the MCU and these forces of nature. I love the two of them together, and I feel like they’ve been really background characters for many movies now. We also really haven’t had a chance to get to know Mantis because she was this beaten character who was enslaved by this Celestial in “Vol. 2.” She was meek, but now she’s been with these characters for a number of years and her personality is coming out. She’s a goofball, but she’s saddled with somebody who’s an even bigger goofball in Drax. I liked the dynamic between the two of them.

Did you write this special and “Guardians of the Galaxy Vol. 3” concurrently?

I probably did. In all honesty, I wrote the special in three days. Literally, there were no notes from Marvel and nothing changed except for that I occasionally add things while we’re shooting. It was really easy and it stayed easy throughout and that was great because “Vol. 3 is actually very emotional. We shot them both simultaneously, so shooting “Vol. 3” for a few days, which was tough going, and then having a day off to shoot this show was fun. Because the stakes on this were low. It was just goofy. One thing that’s cool about it is there’s no bad guy in this one. There haven’t been any Marvel stories that I can remember where there hasn’t been a bad guy of some type.

Did you set out to make a movie without a villain?

Before I wrote the screenplay, I wrote a treatment, and in the treatment there was this other threat. I just realized that I wasn’t interested in this other thing. There was an action sequence at the end where Kevin Bacon jumped around and was performing action stunts, which would have been pretty cool, but the threat didn’t interest me at all. What interested me was the interaction between the characters. So I just cut that out and made it a story about people.