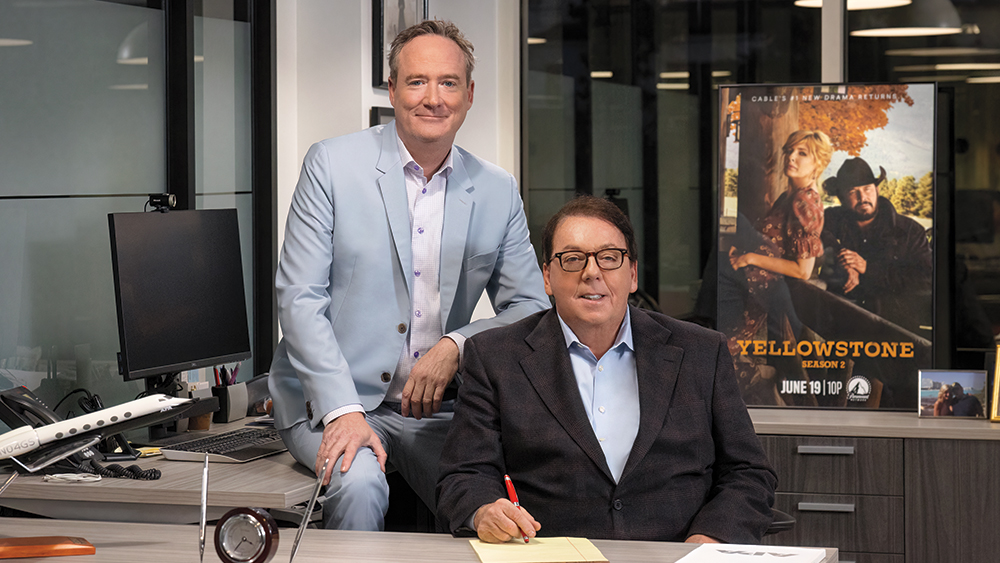 In a moment of crisis, the leaders of talent agency APA were not about to let opportunity pass them by.

The dramatic changes that have swept across the content business and Hollywood’s creative community have made for a topsy-turvy ride for the town’s major tenpercenteries: The packaging battle between talent agencies and the Writers Guild of America in 2019 followed by pandemic disruption left sizable agencies — APA among them — in a precarious state.

But after a swirl of dealmaking, blocking, tackling and talent-wooing, APA leaders Jim Gosnell and Jim Osborne (aka “the Jims”) are heading into 2023 with more confidence than ever about cementing the agency’s position as the leading full-service, midsize alternative to the Big Three: WME, CAA and UTA.

“During the pandemic, everybody got punched in the stomach pretty hard because everything just came to a screeching halt,” says Gosnell, who is APA’s CEO, while Osborne is president. “Necessity forces you to look at your business in a different way.”

The pair have recruited 15 (and counting) seasoned agents to the firm in a bold bid to grow in new and established areas — including TV and film lit, publishing, theater, branding, consulting and helping to enable entrepreneurial ventures on behalf of clients. Simply put, the Jims saw a big chance to make APA more prosperous and a more attractive shop for working Hollywood.

“There’s never been a better time to be an actor in terms of the amount of opportunities,” Osborne says. “There’s a great deal of competition for high-end talent, and that’s bringing the ability for these artists to build out production entities and shift from simply working in a fee-based situation to being part of the ownership of the content and having a real voice in its creation. We’re moving to less acting for hire, more building your own content.”

The APA pair point to Curtis “50 Cent” Jackson as a good example of a client that is growing in many directions at once and bringing the agency into new arenas. The multihyphenate producer, actor and musician has no less than 22 TV series in production or development, including four scripted dramas in the “Power” universe alone.

Sandra Stern, vice chairman of Lionsgate Television Group, the studio home of the “Power”-verse, credits APA with providing Jackson and the “Power” shows with strong support at every stage of production.

“They service their talent very well over there,” Stern said. Lionsgate began doing more and more business with APA over the past decade as demand for TV content has mushroomed. “They have a deep list of clients that we hadn’t really been doing business with until recently. They represent a significant amount of talent in the ‘Power’-verse. They really are good partners with us.”

APA’s expansion plan was only possible because of a fortuitous relationship that Osborne drove for the firm in the dark days of fall 2020. He helped enlist investor Ron Burkle, of Yucaipa Co., to put capital into the agency to shore it up through the unprecedented business shutdowns of 2020 and 2021.

Gosnell and Osborne developed a strategic plan for capitalizing on the inevitable talent fallout from the union of CAA and ICM, which closed in June. Before that, the APA leaders were peppered by Justice Department investigators for months on the potential antitrust implications, which held up the closing for more than a year.

“We had a lot of time to position ourselves to find out who would be a good match for us and where we needed the extra power. It was a long process,” Osborne says.

Gosnell, who has rolled with the tides at APA since 1981, chuckles at the experience of trying to explain the ins and outs of agenting to DOJ lawyers. The firm formerly known as Agency for the Performing Arts was one of several shingles created when Robert F. Kennedy’s Justice Department forced Lew Wasserman to sell off his mighty MCA talent agency as a condition of acquiring Universal Pictures in 1962.

As APA heads into its 60th anniversary year in 2023, Gosnell is revved up about his firm’s prospects. Pressed by a DOJ lawyer about an earlier statement that a CAA-ICM marriage would be good for business, Gosnell hesitated for just a moment before replying: “It’s going to be fantastic for us. Clients will become available. Agents will become available. That’s how it’s all going to shake out. It’s going to create opportunity for everybody. And then it’s about who decides to take advantage of it or not.”